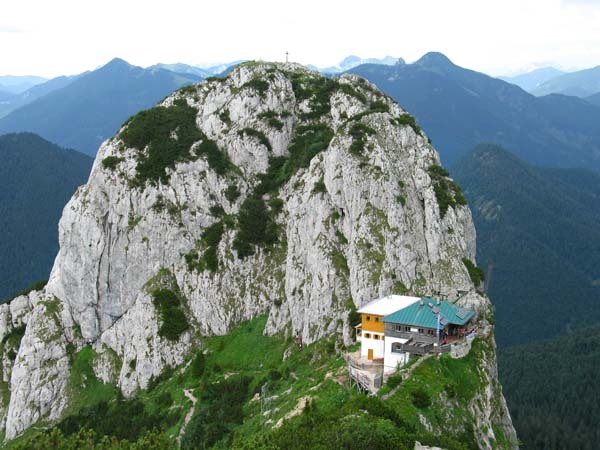 Should anyone ask, speaking from the mountains is fun

I took part in a “Speaking from the mountains” exercise this weekend. That sounds too too formal for something that titles a weekend of hill walking, beer drinking and public speaking. It was fun and nerve racking (also part of the “living outside the comfort zone” stuff). The nerve racking part was being made to think and talk on one’s feet. The fun part was drinking the beer while doing so. Having a group of great people for feedback also helped. We all met at Munich Hauptbahnhof on Saturday, midday and took a train down to Tegernsee where we hiked up to Buchstein HÃ¼tte. Half way up we had a round of “Table Topics” – speaking on any topic given to you by the “Table Topics Master”. This was followed by more hiking and a cozy evening in the hut with everyone presenting a speech on a topic of their choosing for 5-7 minutes. True to form, I started falling asleep around 10:30.

The following day, after a lazy breakfast, we hiked up even higher to Tegernseer-HÃ¼tte. This is a fabulous hut (see picture) sitting in the nook of a hill with views out over Tegernsee and the surrounding hills. Food was great and they even offered to make me a plate of Kaiserschwarrn although It was not an “Official Kaiserschwarrn Day”. Washed down with a glass of “Tegernseer Spezial” .I’m looking forward to go back there and spend the night right at the top of the mountain.

I’ve uploaded the pictures from the trip to my gallery.

Thanks to Ranjith Venkatesh for organising.

This site uses Akismet to reduce spam. Learn how your comment data is processed.